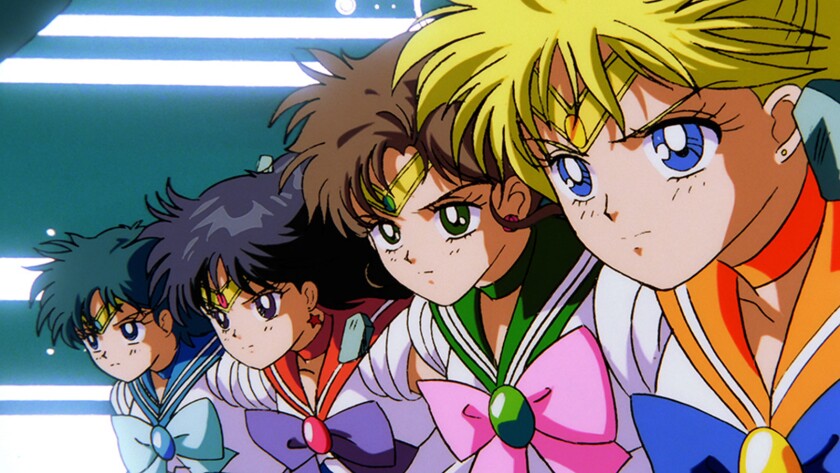 The film was first released in North America on VHS by Pioneer Entertainment on August 31, 1999, in Japanese with English subtitles. Pioneer later released the film to uncut bilingual DVD on February 8, 2000, alongside another VHS release containing an edited version of the English dub. Pioneer re-released their DVD on January 6, 2004, under their ”Geneon Signature Series” line. The DVDs later fell out of print when Pioneer/Geneon lost the license to the film. The edited version was also shown on TV in Canada on YTV and in the US on Cartoon Network’s Toonami block.

The English dub was produced in association with Optimum Productions in Toronto, Canada, and featured most of the original DiC English cast reprising their roles. The edited version of the dub was censored for content and replaced the music with cues from the DiC version of the first two seasons of the anime; the vocal song ”Moon Revenge” was also replaced with ”The Power of Love.” The uncut version of the dub was only seen on the bilingual DVD, featured no censorship, and all of the original Japanese music was left intact, with the exception of the DiC theme song being used. However, no DVD or VHS release contained the ”Make-up! Sailor Soldier” short.

In 2014, the film (including the ”Make-Up! Sailor Guardian” short) was re-licensed for an updated English-language release in North America by Viz Media, who produced a new English dub of the film in association with Los Angeles-based Studiopolis and re-released it to DVD and Blu-ray on April 18, 2017. It has also been licensed in Australia and New Zealand by Madman Entertainment. In addition, Viz gave the film a limited theatrical release in the United States, beginning January 17, 2017 in association with Eleven Arts. The redub premiered in the United Artists Theater at the Ace Hotel, where it retained just the original title of Sailor Moon R: The Movie, rather than the subtitle The Promise of the Rose. The theatrical release included the ”Make-Up! Sailor Guardian” short, and was available in both dubbed and subtitled screenings. The film was screened in North American theaters again nationwide with one-day showings as a double feature with Sailor Moon S: The Movie in association with Fathom Events. Dubbed screenings were on July 28, 2018, and subtitled screenings on July 30.

References- Rebecca Silverman of Anime News Network gave the film’s Viz Media dub an ”A-”. She praised the animation, stating that it was ”several cuts above what we typically see in the TV series”. She also praised the film for distilling the franchise’s themes effectively, its soundtrack and use of imagery relating to flowers. Charles Solomon of the Los Angeles Times also reacted positively to the film’s portrayal of the main characters’ ”sisterly friendship” and praised Viz Media’s dub for not censoring Fiore’s implied feelings for Mamoru, unlike previous English translations.